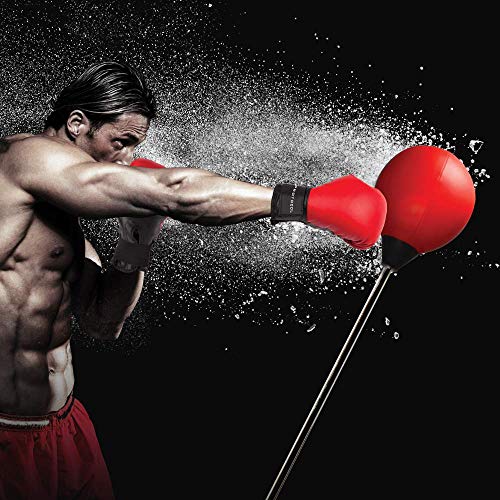 This article aims to educate those who have little knowledge of different types of punches in boxing. So, let us dive straight in and gain an understanding of the nuances of punch attack in boxing.

Although not a knock-out punch, this punch is considered the most important of all. It is a critical punch because it allows the boxer, throwing the punch, to judge the distance from the opponent, and it gives the fighter an idea of the opponent’s defense. A well-thrown jab provides some amount of cover for itself while leaving the opponent with a minuscule amount of space to throw a counter punch. It harasses the opponent and sets him up for more powerful punches.

The jab is a straight punch, quick and powerful. It is thrown with the boxer’s main hand. If the fighter is left-handed, it is called the left jab. The punch is thrown from the guard position, and when it is at a complete extension, the lead shoulder often rises upwards to protect the chin, while the other hand is in a position to guard the face. Once the jab is launched and connects with the opponent, it is quickly retracted to shield the face. Sugar Ray Robinson’s left jab against Gene Fullmer in 1957, is thought to be one of the most skillful jabs in the boxing history.

This attack is a powerful, direct punch. Also, it is used as a counter to a punch thrown by the opponent from the opposite side. The Cross is thrown with the rear hand (the dominant hand), from chin level, right across the body. The back shoulder moves forward, and the lead hand, which continues to jab, is retracted to shield the chin and the face. For added power, the boxer rotates hip and torso in a counter-clockwise motion and transfers body weight onto the front foot, while throwing the punch. Immediately after throwing the Cross, the boxer retracts the dominant hand into a guard position.

This punch is a major knock out punch. It gets past the opponent’s defense and aims to connect with the side of the face or the jawline. This semi-circular punch is thrown with the lead hand, with the elbow bent. It is a hard punch to execute as it requires the upright fist to be rolled from a vertical to a horizontal position while rotating the whole body in the same direction. The head does not move. Once the punching hand connects with the opponent’s head, it is quickly pulled back into the guard position. There are two variations of the hook.

This punch could be to the head or the body when the opponent has mistakenly left himself open to a direct hit.

The Lead Hook To The Body

Also called the “body rip” targets the lower body (as opposed to the head), particularly the ribs or the kidneys. It is one of the most dangerous punches and knocks out the opponent.

Joe Frazer used the left hook with devastating accuracy against Muhammad Ali in the famous 1971 bout. Used in the 15th round, it effectively ended the fight in Frazier’s favor.

This punch is executed when the fighters are close to each other. The uppercut is thrown with either hand. It travels upwards and inwards from the outside of the body, aiming for the opponent’s chin. When executed correctly, it lifts the opponent in the air, and throws them off balance, leaving the body open to more deadly punches. An uppercut followed by a hook is one of the most lethal combinations of boxing punches.

There are two types of uppercuts.

This punch is very similar but less potent because the rear leg does not allow for as much power as the dominant leg.

Mike Tyson was best known for this right uppercut. Although he did use other punches with high effectiveness, when he delivered the right uppercut, it was almost always a straight knock out.

Besides these above-listed punches, there are also some relatively more unconventional punches in boxing.

This punch is a modified Cross. It is used when the opponent is too defensive, making it difficult to land a clean blow. Also, it starts on the right and aims to land on the left side of the opponent’s head. Typically the opponent will not be able to see this punch coming with the gloves covering the face. Once this punch lands, it breaks the opponent’s guard opening the opponent to more devastating blows.

Ernie Shavers is known to have used this punch with maximum success using it to open the door to delivering most of his final knock out punches.

This punch is a power punch, and its success lies in the unexpectedness of it. Essentially it is a fast, powerful punch to the head or face. The boxer opens with a Lead Straight, which is an unconventional move.

This attack is a very powerful left hook or a counter punch, delivered while taking one quick step backward. It is known to stop fast-moving, aggressive opponents in their tracks.

The Shovel Hook Or The Hooker Cut

This punch is thrown at a 45-degree angle. Primarily by mixing up the offense, to confuse the defense, this punch is delivered at an angle to the solar plexus or the chin.

This move is one of the most difficult to execute in boxing. The attacker closely watches the opponent’s lead foot, anticipating the exact moment the opponent will throw the punch, at that time the boxer slips out of the attack while simultaneously launching a straight right, and ducking away to prevent being leveled by a counter punch. Floyd “Money” Mayweather is known to be one of those with the most successful execution of this punch.

We hope our brief article helps you understand the different attacking punches in boxing. Understanding the nuances of a sport enhances the viewing experience. So next time you watch boxing, you will enjoy it more.

Scroll back to top