A magazine is a periodical publication, published on a regular schedule. They can be weekly, fortnightly, or monthly publications, and the contents may pertain to one topic of may contain a variety of topics. A Boxing Magazine is specifically published for those boxing enthusiasts who wish to know more about what is happening in the Boxing ring worldwide. We profile a few of the best boxing magazines that have taken the fancy of the true lovers of boxing.

This is a widely read and subscribed monthly magazine published by Kelsey Publishing Ltd., U.K., and is available in various devices and platforms like Kindle e-Readers, Fire Tablets, Fire Phones, and many other Free Kindle Reading Apps.

The magazine covers the happenings, both past and present, of one of the most thrilling and demanding sports, boxing. It gives a ringside view of the performances of boxing greats and also reviews the performances of upcoming boxing stars on the horizon.

A ringside view through Boxing Monthly

The contents bring exciting reviews of the fights over the past month and the upcoming fights to look forward to. A column titled ‘Pound for Pound’ has articles on top boxers under different weights. The section ‘Frontline Diary’ brings to your reading room, observations and reflections from the ringside by the magazine’s top columnists.

In the column titled ‘In this corner with Russ Anber,’ the reader gets exciting views and opinions by Russ Anber about past, present, and future fighters and also poignant and fitting tributes to past greats. The column ‘Aftermath’ gives assessments of the big showdowns that are to take place under different weight categories.

‘The Big Question’ is a column that brings you views and assessments made by the expert Boxing Monthly team and gives their predictions about upcoming fights. The ‘Glyn Leach Column’ is a tribute to the former Editor of Boxing Monthly, the late Glyn Leach, and brings interesting stories and insights from his long years with the magazine, sharing his love for the game.

‘Columns’ is an interesting section that brings to you opinions and assessments by highly acclaimed columnists on the fights that have captured the imagination of the boxing enthusiasts the world over. ‘BM awards’ provides information about the great pugilists who have won the BM awards initiated by Boxing Monthly since the year 2010. ‘All-time top ten’ gives a systematic list of all-time greats in the different weight categories. ‘Ratings’ brings to you the top ten ratings of boxers in different categories. This rating is made separately for the top ten in the World and Britain

The subscription comes with a risk-free 28 day period. The annual subscription costs about $36, but you have the option to subscribe for a lesser period. For subscriptions longer than six months, the subscriber will be sent a renewal notice through email, and the said subscription will be renewed at the lowest rate prevailing then. Price changes will be informed to the subscriber.

This is one of the top-rated boxing magazines in the world and has a huge readership the world over. 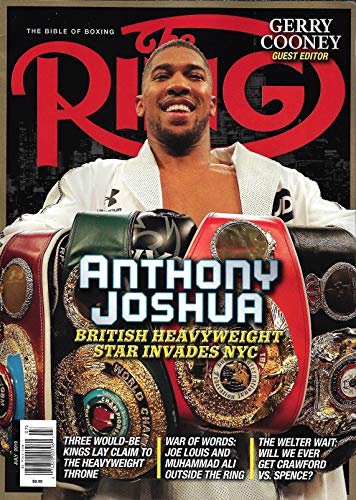 However, the magazine now also has articles on MMA fights as well.

The Ring’s view of the Ringside.

The Ring magazine, also known as the Bible of Boxing, is a best seller magazine for all boxing enthusiasts and ranks among the best in the world. The features give the reader an exciting experience every month through the varied contents that are published about boxing, boxers, the fights, and all those involved in this combative sport.

The magazine has features that bring out small and crisp articles with photos of the different fights during the month and also the outcome of what to expect from the future bouts that are slated to take place later. They also feature articles on the legends of boxing and bring back wonderful memories of their glory days, of the days when they made millions of people rise and clap in unison to their champion fighter.

There are also articles on newcomers who are earning a name for themselves and who will be making it big time in the days to come. These articles cover the top boxers in all the different weight categories and give an assessment of their strengths and weaknesses, and what the future has in store for them. There are also articles about some of the ‘never say die’ boxers who never know when to give up.

These stories reveal the human side of these personalities, their grit, and the unflinching determination that makes them come back despite the knocks that they take both in the ring and in life.

Most of these articles and columns are penned by highly experienced and dedicated columnists who have spent a major part of their lives around the ring and in the dressing rooms of these boxing stars. Their interviews and discussions with these boxers bring out the real human side of these personalities and their yearning for fame and name in the ring.

There are columns for the best boxers which take you through their exploits over the years and how they achieved their success to the top and what keeps them going. These are articles that a boxing buff would never hope to miss. In addition to these, some sections take the reader to wonderfully gifted fighters of yore who had taken the ring by storm in their hay days. Their fight to reach the top, and their determination to stay on top are stories that could make any boxing enthusiast stay glued to his seat. No wonder this is known as the Bible of Boxing! 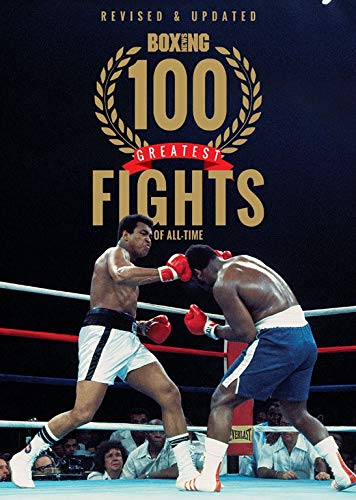 This is a single issue compilation of the 100 Greatest Fights of All Time brought out by Boxing News magazine, a British weekly boxing magazine published by Newsquest Specialist Media.

Dating back to the year 1909, this is the oldest running boxing magazine that is still in publication.

Boxing News Magazine (2019) Revised and Updated 100 Greatest Fights of All-Time is a wonderful guide to the most historic and exciting contests in the long history of the sport. These 100 greatest fights have been chosen by experts and historians who have been involved in boxing for long years. These fights are the defining moments in the history of boxing and provide the reader all the details and statistics of the bouts and give valuable insights into the different styles adopted by the contestants and the opinion and assessment of the experts on why these bouts are so important.

There is a souvenir of the 100 greatest fights in a boxing ring and gives the list of all the great fights and the biggest names in boxing history. The photos that are provided in the edition take the enthusiasts back to those days when some of the greatest fighters battled for supremacy in the ring.

This creates a plethora of images that will captivate the reader. A great tribute to the greatest fights and fighters of our times indeed!

This is an annual publication and is priced at under $50.